I am going to try and catch up on life here, but with increased hours of work, and two travels this month, I am simply uninspired to write. What I was inspired for, though, is to write in my dairy every morning a note of thanks - in fact, a whole page of thanks. I joined in some group for this "challenge", which was not a challenge at all - turns out, there is SO MUCH to be thankful for in my life. I never looked at the groups' "chat" for support - I opened my journal every morning, before I even open computer, or have a sip of coffee (which was sitting next to me, steaming) - and wrote. If anything, it was more difficult what to pick to start with!

But still, the rest of the month, besides those travels, work occupied both Larry and I's time and mind, at times overwhelming. It wasn't bad, though, I wasn't grouchy for that - 7 days a week, and more hours daily - it was as one of those saying: "If there is a Why, there is a How". It had to be done - and will have to be done for the following 6 months as well - and I just kept on doing it.

The knitting time (and knitting creative inspiration) was on all time low for that matter. I whipped a sweater over one weekend for my friend Pam from the yarn she got from her friend who owns Alpaca farm (she spins herself, too). I grinded that thing non-stop! There was a self-imposed deadline looming. I then returned to my lazy work-in-progress of re-making a bison/silk top from Taos yarn (circa 2010), adding reclaimed cashmere - I finished it, and, believe it or not, ripped it apart a mere week later (without wearing it outside even once) - I was not satisfied with the use of this yarn - and this color. I do have an idea for it now, so lets see if that works. 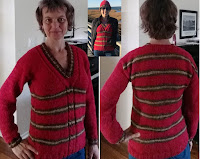 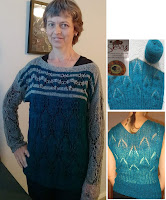 Reading took a seat even further back. As in - the Big Book "12 rules for life" I was half-way through and enjoying, was shut down and stored away. I picked up from the library a book written by a knitter "Yarn Harlot" - and did love it (so resonating with my thoughts!) - I read most of it during first trip, and finished on the second. Here is an example of "our" thinking.

So, the trips. I had a super-quick one to Portland mid-month, see my boys and Monika's family. As always, a mixed bag of emotions, but so glad I was there, also as always, and plan on keep on going. For both of those reasons, combined. It begs to say that in my 9 years, 3-times-a-year visits, rainy Oregon only rained on my total of 3 days (not 3 trips). This time, despite pretty chilly temps, it as partially sunny, yet again, and no wet stuff! Thankful for that, for sure. 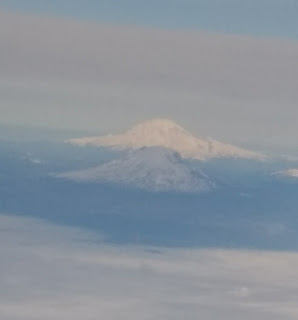 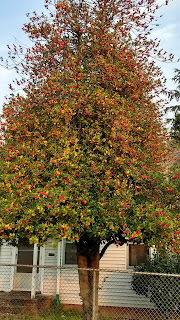 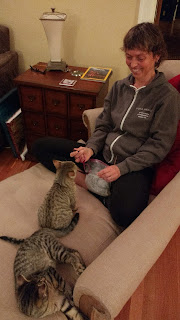 Speaking of cool, Austin, too FINALLY got their "coldish season"! We went from sweating buckets half-naked on the run on October 31st, to windbreaker following week. Lovely! 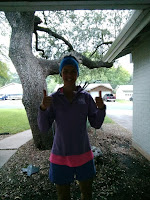 Myo Massage is continuing final stages on remodeling the new space - we expanded and now using the rooms in the new wing. A little confusion, but it's coming together. The website is up and running with updates! See examples of my "modeling" career here and here, and my bio here :) They also added a bunch of classes on top of "normal" massage services. I wonder how it'll go for the business and wish them well. It's exciting to be in the midst of a local business growing, 11 years and expanding. My side is intact and thriving, so that part is good.

Somehow I kept plugging along with all my runs, and even squeezed gym workouts and yoga studio classes on top of each other on those travel weeks. Come December - I will be checking out a new Baptiste-driven Power yoga studio Wanderlust, which I joined at the discounted rate for intro month - which means, of course, yoga 4 days a week. And no, I will not drop the rest of my obligations:)

The second trip was during Thanksgiving week, to the place we will call home-town soon enough. We got to spend full 3 days hanging out in Colorado Springs, visiting local trails, coffee shop, friend's party, and simply breathing cold dry high altitude air. Whirlpool of a drive, but so worth it. 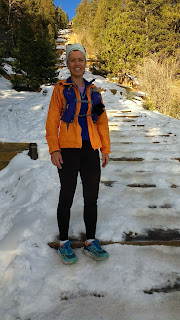 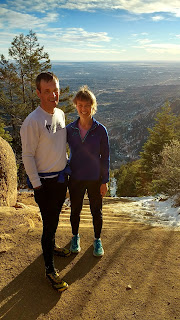 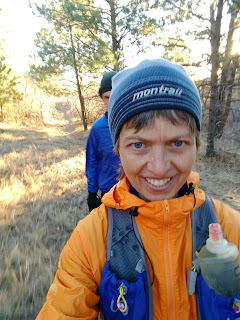 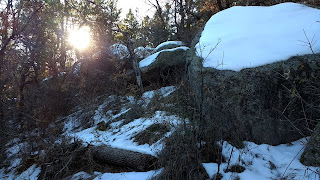