Link to all photos

4 weeks to the date of my getting out of the woods, I was back in the happy place, where Larry and I both belong - mountains. Pecos Wilderness is the biggest in NM and in our home considered to be Larry's playground. He's explored it a few times when lived in Albuquerque for a year over a decade ago, and then twice took his son there. It is also the closest in driving time to our middle-of-no-fun-land home, all of 11 hrs. With that, at around 12 pm on Thursday, after arriving to Santa Barbara campground and quickly setting up a tent to stake the spot, we were on our way into the woods.

Originally, the loosely proposed plan was to cap 2-3 peaks of 13,000 feet in 3 days, but with uncertain weather (rain in forecast for all the time we were to be there), our late arrival and some other unexpected complications, we mostly played it by ear, just around 12,000 feet, and no matter what, there was nowhere I rather be at - and nobody I rather be with.

After not the most exciting first 5 miles out of the camp (which Larry said we'd have to do all over on the way back, and repeat tomorrow, and probably the day after), we still were breathing dry air - dry in more ways then altitude of over 9,000 at the start, it also was sunshine! - and hiking the single track, reminiscing on his previous trips here, jumping over creeks, and discussing if we should try and find an unmarked long-unused path to one of those peaks.

And with knowledge of general area Larry had and "reading" into trail signs, after forging a small creek, we found it! It actually wasn't that bad, though definitely not used, and we quickly figured out why - going steep some 1,400 feet of gain in less then couple of miles does a number on your will to hike. But not to us! Huffing and puffing, we made it to the ridge, where the views on both sides were breathtaking - also in more ways than one.:)

After proceeding for some 20 min on the ridge towards the peak itself, we made some calculations and realized we will not make it back to camp before dark. Oh, well, it was well worth it anyway!

On the way down we were both hit with the altitude sickness. Even though we haven't reached far above 11,200 feet or so, the sudden jump from a sea level, coupled with poor hydration and calorie consumption, wasn't cutting us any slack. With 15 miles and just a tad over 6 hrs of hiking, we got back, to recoup, finish setting up, and spending an evening in the woods.

And what a luxury camping is a real campsite felt to me like! A huge area for the tent, a table, a fire pit (where I gave Larry a lesson on striking a good fire:)), a water spigot - and a sleeping pad, bigger tent than one I carry, and a bunch of other tiny, but oh, so cute add-on's! After dinner (Ramen noodles, of course), we stared at the dancing fire until it was smoldering, and got into our tent for a night of sleep.

Friday was to be The Big Day - big miles, and at least one 13-er! Those first 5 miles, again, went uneventful, as we started to climb gently switchbacks soon.

Somewhere mid-way we heard a chorus of coyotes - for a good 20 min - probably circling a huge elk we saw the day before! Just a wild guess, but that was our entertainment. Only one couple camped in that general area, and one family was coming down from the divide - a very solitude mountain area it is, to our liking. We soon reached the Santa Barbara divide at 12,000 feet, and the panorama that opened up was gorgeous!!! And no altitude effects this time!

After dancing on the divide, we moved towards Truchas peak. Within the first mile we came to a beautiful Truchas lake. Aw, the paradise!!!

I quickly pulled out a lunch, and we really took our time enjoying the setting. The conversation rolled around how with getting older (er, wiser), it is not as important to get to the pre-set arbitrary "final destination", as to truly enjoy the journey. In the meantime, the storms seem to be forming on top of those 13-ers, and we were approaching noon, the time it gets dicey at the open ridges. Making another time calculation, we figured we'd bag the peak attempt, and better spend the reminder of the day by taking a different way back to the camp, extending our hike to over 31 miles. With that, we picked up and left, walking through the dense forest of spruce and fir, which is my second favorite type of forest (the first being birch). I smiled as wide as my lips allowed.

As we reached the divide on another side, we walked on it, admiring wild flowers. What a great way to live a day!

According to a topo map Larry had, our next trail was to drop somewhere from that ridge. There were plenty of tall cairns ON the divide itself, but as we were getting in a general vicinity where the turn off was to be, the trail gotten very faint, and the storm rolled in. We stopped to put the jackets on, but between not seeing a single sign and being concerned with a thunder and rain, the self-protecting response was to keep moving forward...

until the 20 years old topo showed us we went too far off. Thank God Larry a) had the topomap, b) knew how to read it and find trail skirting close enough to where we stood, c) we never panicked, d) were able to skirt all that scree, back-track, drop down and locate the trail in the forest! Whew, after 40 min, disaster averted. 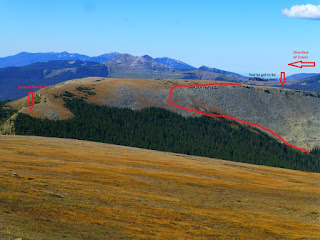 After recouping mentally from the search - and with the rain never materializing into a storm (another blessed day!), we took that trail down...with wet ditches, horse-bitten, and without much of the views if at all. More or less silently we moved, I - remembering all my long days on PCT (this was to be our 32 miles, 12.5 hrs hike for the day), Larry - dealing with such a feat basically off the couch, and with a few nasty raw blisters to boot. I have to say, I had never been more proud of him - and also was in awe of myself for having done that task for 15 days straight with a pack.

Finally, after giving up hope, we made it to the turn where the last 2 miles we knew would bring us to the camp. Our mood lifted, and the local cows gave Larry a reason to show his farmer-boy skills.

As soon as we got to the campground, we felt rejuvenated, despite a long day, and another camp fire was in order to spend the night talking and dreaming about more adventures to come.

On the last day, we decided to skip a big hike, and took a different local short path just to break cobwebs in our muscles. 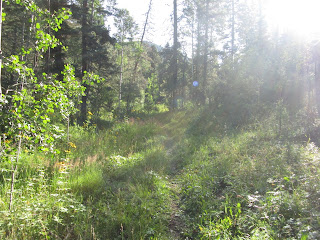 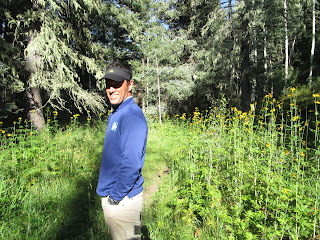 We then rolled through some no-name town of Mora, where Larry surprised me with his love and knowledge of my wishes - he dug out some information that Mora has a non-profit organization raising Alpaca, goats and sheep, collecting their own wool, spinning it on the local mill, hand-dying it, and selling for pennies! I got ALL that for $40!

And that was our last venture in the the real mountains, on the real trails, for the year. The reality of living in Austin, TX, where a drive takes a full day to get anywhere decent, and the airfare travel gets costly and tiring as we advance in our age...And our quest on getting closer to the Dream Home in a Dream Place continues. Soon, we will have it all in our backyard! But for now, every outing like this one livens us, gives us purpose, rejuvenates, feeds our souls, and it is plain what we love to do.
Posted by Olga at 12:58 PM

What a beautiful place to have nearly all to yourselves!

I miss NM very much....Deb and I hiked in that area many times, it's one of our favorite areas. Thanks for sharing!