Someone awesome I've met on trails.

The Trail Runner magazine (online version) is awesome. Not only they publish great dirty news (and lately they really lean heavily towards ultrarunning in their paper version, which could be a good and not so good thing, depending how you look at it), they also have a blog going on, where not only they have writers present their opinions on various topics, they allow us, normal folks who love playing on trails, to participate via their Trail Runner Blog Symposium. The idea is kind of like a Synchro-Blog: a bunch of normal bloggers get a notification what is the next topic for the Symposium is, agree to add our voice, write a blog post on our own blog - and submit the link to the Major Page.

June topic? Tell about someone awesome you've met through trail running.
And we all know how much I LOVE writing about THIS one! There are many, many people who are very, very awesome and special that life allowed me to meet because I joined trails, and, especially, trail ultrarunning. The people who find their passion in this what used to be an odd niche are incredible, and when you meet them, open your heart to them, share your pains (and not just physical) - the bond lasts forever.I can list all the "famous" folks who had become wonderful friends over the last 12 years, I can list my crazy and committed running partners, but the most awesome person I had met was the one who chose to spend his life with me, through thick and thin, sickness and health, rich or poor...yes, Mr. Larry King. And we met not simply "through" trail running - we met, quite literally, on trails. Lets the story begin...

There is this little race, Zane Grey 50, that I consider my favorite of all 50's I've done. I had run it in 2006 and had an amazing time, proving myself I am good at exactly this kind of things, crazy tough, with terrain and elements that put many folks down. I decided to come back in 2007. There was an injury involved, and some struggles, but as I said - this was MY kind of race, so I persevered - and made a small connection that I had no idea would go anywhere. There was this guy, who read my blog, and introduced himself before the race - we shook hands, and then...he passed me at mile 3, I passed him at mile 25, and that was it, the history, a normal thing, a thing that happens to each of us every time we go on a trail.

We were both married at the time, and from time to time would check into each others blog. Something he wrote once touched me, it felt that he was seeking support in a darkness of time - I felt it, I was in my own dark days...and I reached out, told him to hold on. Turns out, there was a reason we felt connection, all of a sudden - those dark times were of the same proportion for both of us: we happened to be ending our perspective 18 years old marriages. That was weird, but that was all there was.

Another few months pass by, and I come to check out this new great race in NM, Jemez 50. The terrain and difficulty seems to be right up my alley, I arrive - and who comes to shake my hand again at a pre-race meeting but Larry. And so I joked: "Don't let the history repeat itself!".

The race began as always, with me holding my reins, and slowly making my way through the field. Somewhere at mile 30 I come up on, yes, Larry! He is having struggles with his energy and with his hip, and I smile, and all I can say is: "You better hang on to mys skirt, don't let me drop you again!". 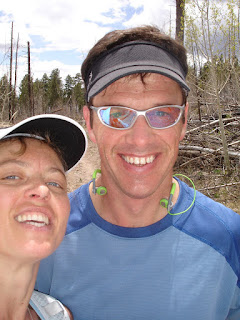 And so we go, together, and in a matter of minutes, we talk just about everything in life. Our running, training, trails. Our families, former spouses, kids. How it all affected us - and how we have no clue what to do next. We laugh, we gasp, we get lost. We take a hundred of photos, and we enjoy the views, even as we push, and push forward relentlessly... 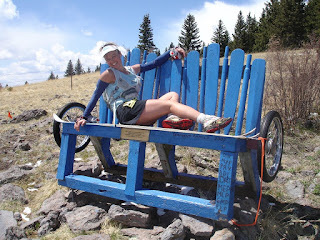 I won't repeat myself of that race recap, it was done already. But life's story was only beginning to get written...

He emailed me with "thanks for saving my behind", I responded with "Anytime you want to see Oregon, come over and I'll play your tour guide". 2 weeks later he, a guy who thinks months before making any kind of decisions, was on a flight to Portland - and what a weekend it was!. 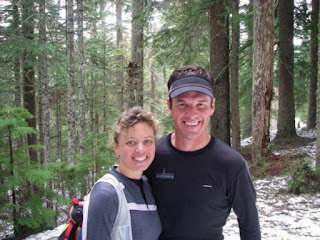 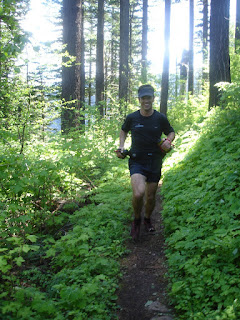 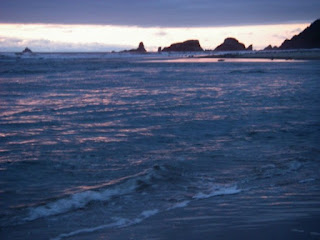 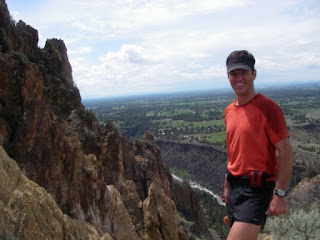 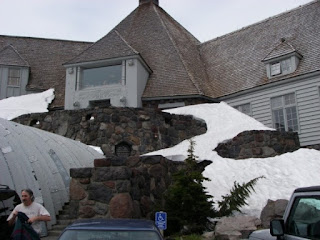 There was many more trail meetings, all 14 months of it - because from that moment on, we knew, just like that, our lives are meant to be together, and so all we did was fly to races we ran together, supported one another, or just explored new trails. I remember Hardrock 2008, where I spent 2 weeks playing and pacing my running partner Mike Bushwhacker and Larry visited for a weekend - I bought a map for the mountains the course traverses, and had dozens of folks sign up on it for Larry. Most signs read something in tune of "Are you sure you know what you're getting yourself into?". That was fun...this map is cherished in our home, and so is Hardrock 100, which served as my running highlight in 2009 - and Larry's pacing (low-light, which we still have a lot of smiling about) .
And that would be the story, but the trails did not stop being part of our lives. I said recently to a guy who interviewed me for iRunfar.com, it's not that we've met on trails is what brings us so close. It's the fact that both of us love them, and what surrounds them - the solitude, the challenges, the beauty, the views, the camaraderie, the unknown, the simplicity, the nakedness of existence and sharpness of thoughts...

And so it was no surprise that I was driving my car across the country in the heat of the summer of 2009 from Portland, OR to Austin, TX, and no surprise that the venue for our commitment to each other was, you guessed it, local trails. 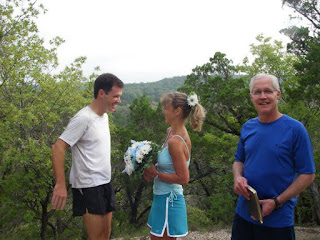 There is nothing easy in life, but nothing that's easy is what remembered or cherished. We have our challenges, and we work through them - together, my awesome husband and a wonderful man, one who believed in me, who chose to love me as I am, who thinks I am pretty awesome as well - and I.

What a sweet story. You made my day.

I love this story and photos -- congratulations on your happy ending, or should I say, happy beginning!

You guys are ridiculously cute together.

Great story, Olga....very similar to mine and Deb's :-) Our best to you both.

What a great love story! I too am lucky enough to have a trail running husband.

Love your quote: "...it's not that we've met on trails is what brings us so close. It's the fact that both of us love them, and what surrounds them - the solitude, the challenges, the beauty, the views, the camaraderie, the unknown, the simplicity, the nakedness of existence and sharpness of thoughts..."

As a trail runner in mid-divorce this gave me hope.