Heading into next crazy adventure.

I am not sure what was I thinking signing up for 52.3M of Pocatello with 14,000 feet of elevation gain, but this is what I got for next weekend, and the agenda is simple: try and not kill thyself as that thyself has a 100M race 3 weeks after that, which is an important one for the calendar year. Larry and I ran Pocatello 50 in 2009 when I may have not had a perfect quality training AND had a sprained ankle running the whole race in a brace, BUT I was mountain-trained for sure, still living in Portland, OR. When I signed up for P50 this year, I kept thinking that I prefer long climbs and descends. At this point I have no clue where my strength is and what I should have done instead, so I'll plow with it. My goal is to be around 13:30 for the thing (2009 saw us at almost an hour longer time, ankle brace, goofing around, getting lost and all that). And since my quads took a whole week to recover from the punishing downhills of Quadrock 50, and my energy level didn't come fully back till hill repeats this Wednesday (10 days after the race), staying "within" is extremely imperative. Either that, or, like Larry suggested, go out and hammer it - and he'll be able to run that very 100M race in a very relaxed state of mind without looking over the shoulder...Nah, why would I want to give him such an advantage?

Speaking of Larry, he's been hammering this week like never before. I am in awe. Kind of scared that he'll break over, but so far if he keeps it through this and next week, he is golden.

I've been having a string of great workouts as well, since I only have this one week to get any quality done, so I am keeping the eye on a tiger. Eating only right foods and putting my mind into each and every one - run, gym, yoga, hills, road, trails...And the weather is not cooperating. There is a reason I sign up for a bunch of summer runs out of state - I can't stand the Texas heat and humidity. You can talk all you want about will power and goals in mind, but it's just wears you off, when it lasts 6 months! May be next summer I'll do some other half-idiotic body competition instead. Or just let it go and fly to Bahama islands for a all-paid resort stay. Whatever...

Other than that, life goes on. I mean, what else is there to be? Just when I am about to give up on parenting, my kid sends a sweetest message: "Tell him that although I was still smoking back at that time tell him that I was struggling with money and life and a place to live and that since I have stopped, I have 2 jobs, am going to school, and have a place to live comfortably and that I'm completely out of any serious trouble. Tell him that I understand that he's in high school and everyone's doing it and it does feel good to get high but that he's starting a dependency on the crap that will be a lot harder to stop later in life if he keeps doing it. Show him this email. I understand that my word won't do much good for him as he is in high school still and does what he believes is right and he doesn't understand that it will only get worse but show him anyway. Tell him I love him and that he needs to stop before it gets harder. Thanks again for all your help and I hope all goes well with Stephen." Yes, Stephen, the sweet child with straight "A" grades across the board, is trying his hand in what "everybody else is doing". I feel like I am fighting an uphill battle, when majority of parents close their eyes on things, too busy and too overwhelmed with their own problems, and are using some kind of their own pain-numbing "helpings", and when lots of governmental bodies vote to make some drugs legal and support the trafficking of it across the border. But may be I am hit too close to home, so I struggle trying to make sense of things that generally don't. They are different, my boys, indeed. It doesn't make my mind freak out any less. But I take a breath and picture a long mountain race, like Alex said: "it feels like I am running a 1,000 mile race and it's a long way to the finish, but I know when I get there, I'll be in a first place". At least he is trackin' along where we all want our children to go. "You know, starting school was a good idea not only for the educational aspect, but for the social aspect as well. It made me realize that world is not a bunch of low-life surviving on nothing". Took him awhile...

Well, so much for keeping this blog related to running only last few years, huh? Running, after all, is not the major point I live for. It might be a respite, a channeling of so many emotions, something that shows me that at least in some actions the outcome does depend on what's been out into getting there. That hard positive work pays off. What happens to you is fully depending on your own actions and attitude...

Stephen is back to boxing. That much is good. Three years of great practices and an awesome fight record, and almost full 3 years of a break - he still remembers stuff. Richard Lord is totally impressed, with Stephen, my ultra-running, and the fact that we bought a house from Jesus Chavez, a great boxer who trained in that gym and made a serious name of a champion. May be, just may be, this will bring some flow into my son's life...And he is also going to a Christian Adventure Camp at Camp Eagle, thanks to Chris-the owner who is a friend through Tejas Trails races. This Saturday we both also going to volunteer at Bastrop park to help rebuild it after past September's devastating fires. Never give up. Whether in a 100M race, or in a real life.


That all seems sad, but it wasn't intended to be. Last night during my Bikram practice there was a light puffy cloud that lifted off. Kind of weird, because in general I am not into "eternal experiences" and all other paranormal activities. I can't even fall under hypnosis. But it was real. It just felt like letting go. The anger, the frustration, the fear of loosing control. You can only do what you can do. If you give it your all, that is all asked of you. The impact and outcomes on others depends on how they react to it. And it's out of your territory. Like I always say about racing: if you look into your eyes in the mirror and know you gave your all, that's all that matters. So, as of today, I will begin practicing same mindfulness in my life.
Posted by Olga at 11:31 AM
Email ThisBlogThis!Share to TwitterShare to FacebookShare to Pinterest

Pocatello looks fantastic and I hope you enjoy it. Life is funny and you take it all in stride with a good attitude, which means you will always be alright :-)

When are you going to write that book of your? You may not have all the answers, but you're asking the right questions and moving in the right direction and giving your all and I always come away with a new perspective on life after reading your blog. :-) And your kids are so lucky to have you, never giving up on them and look how A has turned around. Now go kill it at Pocatello!

Life is a crazy adventure, isn't it? And you're right, we just have to give it our best, and then let go. The teenage years are so hard - on our kids, and on us! Sometimes I feel like I'm talking to complete strangers. But, I know we'll get through it. Have a great run this weekend! Can't wait to hear about it.

You were thinking that Pocatello will be an awesome adventure! Looking forward to seeing you there!

I don't give myself another choice but to be alright:) Thanks!

About that book...when I semi-retire?
I am sure my kids don't think of themselves as lucky while going through teen years, more like "why can't you be normal like my friends' parents?". All I can say is tough, but my core values can not be changed.

It's the following weekend. But yes, letting go is such an art, and takes much more than holding on...so weird, huh?

Pocatello certainly IS an adventure, and I also was thinking I'll get to see so many friends from the other side of Rockies!

Good luck this weekend. Enjoy! Keeping it real as you always do, thanks for sharing. Funny how some think just because we have a blog full of running and adventure that's the main focus, NOT...just a great outlet, awesome hobby and time to reflect on all that really drives our lives. Go get em Mom!

Ain't it the truth...it also gives us strength to live that life, filling with confidence and power to overcome! 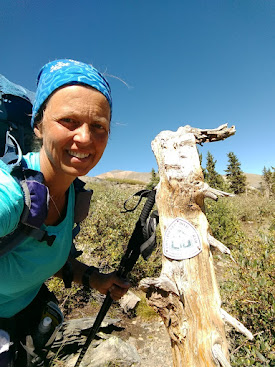